Shifts in pipeline vandalism in Nigeria? 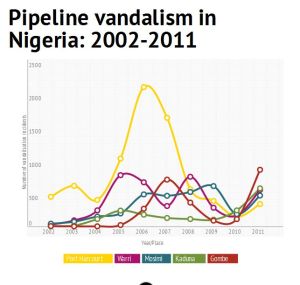 Click on image for interactive map with individual figures

In the infamous league table of pipeline vandalisation, data from Nigeria’s national oil company shows the volatile Niger-Delta region may at least be taking a back seat; or at worst be getting a run for its tainted petrodollars from the South-West and Northern areas of Africa’s most populous nation.

Nigeria’s over 5,000-kilometre network of pipelines are routinely broken into and about 250,000 barrels of crude is stolen daily for sale on the local and international black markets, reportedly costing the country anything from $6bn to $12bn annually.

From 2002 to 2011 records show 18,667 incidences of vandalisation occurred. Is there anything else a humble graph made from this report by the Nigerian National Petroleum Corporation can tell us?

Gombe: From zero to infamy

A look at current news stories shows this disturbing trend is continuing; just read this, or this. Because they host communities that are already awash with ethno-religious crisis, Gombe and Kaduna need to be a stronger feature on Nigeria’s agenda before they tow the self-destructive line of the Niger-Delta. The consequences of an addition of the brand of violence and environmental degradation that are hallmarks of pipeline vandalism to the North is unimaginable.

So back to the original quandary: is the Niger-Delta region taking a backseat in pipeline vandalisation? Not as far as we know, because the NNPC has (ahem) not released any such detailed figures since 2011.

But going by oil companies reneging on delivery contracts four times in as many months this year…it seems what looks like a SHIFT in pipeline vandalisation activity is actually a SPREAD.

Nigeria’s amnesty budget: 10 other things N66bn could pay for »

One thought on “Shifts in pipeline vandalism in Nigeria?”